Photo Guide Thomas Zwei demonstrates one of the benefits of late summer travel in the upper Lynn Canal with a photo of the recent night sky. 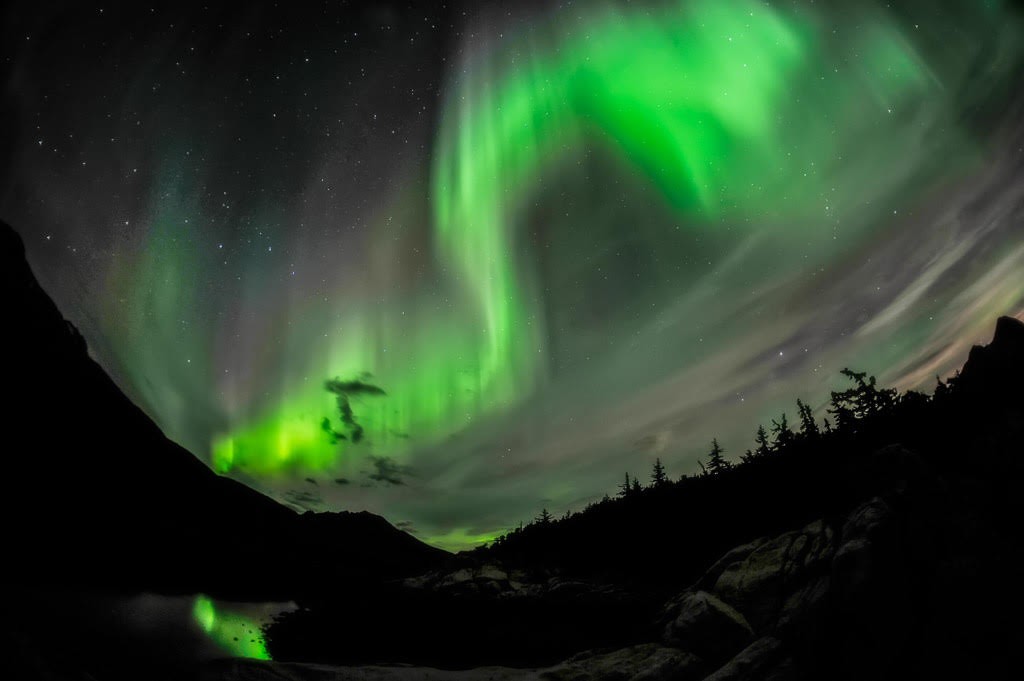 I went to Skagway today. Its a different world from Haines. Funny how it is only 15 miles away but it is a different world. The difference is that there is no road along the fifteen miles. In order to drive there, it is 360 miles one way. By boat it takes 45 minutes, by plane its 12 minutes. But because you can’t drive between the two quickly, each one retains its own flavor. Think of the towns down south that are fifteen miles apart. How different really are they? With the strip malls and the freeways, going along at sixty miles an hour in your own car, when you want, where you want, its easy for everything to homogenize. But since there is no road, the distance seems much greater. And so the flavor is different.

There were four big ships in Skagway today, so there were people everywhere. One thing I noticed is that they were all crammed along the eight blocks along Broadway. I got one or two blocks off of Broadway, and it was like being in different world. Its as if Skagway has two different worlds- the world along Broadway and then the world off-Broadway. And I preferred to be off-Broadway. Its residential. Small houses with nice lawns and gardens, interspersed with a random old building…..what was it? An old warehouse? Something to do with the gold rush? The railroad? Some buildings have interpretive signs from the National Park Service, others don’t. I enjoyed my walk.

When I got hungry, I headed back towards Broadway. I know the restaurants in Haines, and there are some good ones…..Mosey’s, Fireweed, the Lighthouse, the Klondike, to name a few. But I live in Haines and many of those restaurants are open just during the summer, so I felt like something different. I saw a sign….Bombay Curry, and headed inside. That’s something different, an Indian restaurant. I love Indian food, and was pleasantly surprised. Not only by the food, I had a nice curry and they weren’t afraid to spice it up, but also by the ethnic diversity in Skagway. The couple that ran the restaurant were definitely from India. I went in to use the internet and the guy running the shop was from Bulgaria. Haines just doesn’t have an international crowd like this. And since I’m Guatemalan/Italian and have been fortunate enough to have traveled extensively, I appreciate diversity.

I first came to Skagway in 1983, and first came to Haines n 1986, so I have friends in both towns. They are different, and I like that.