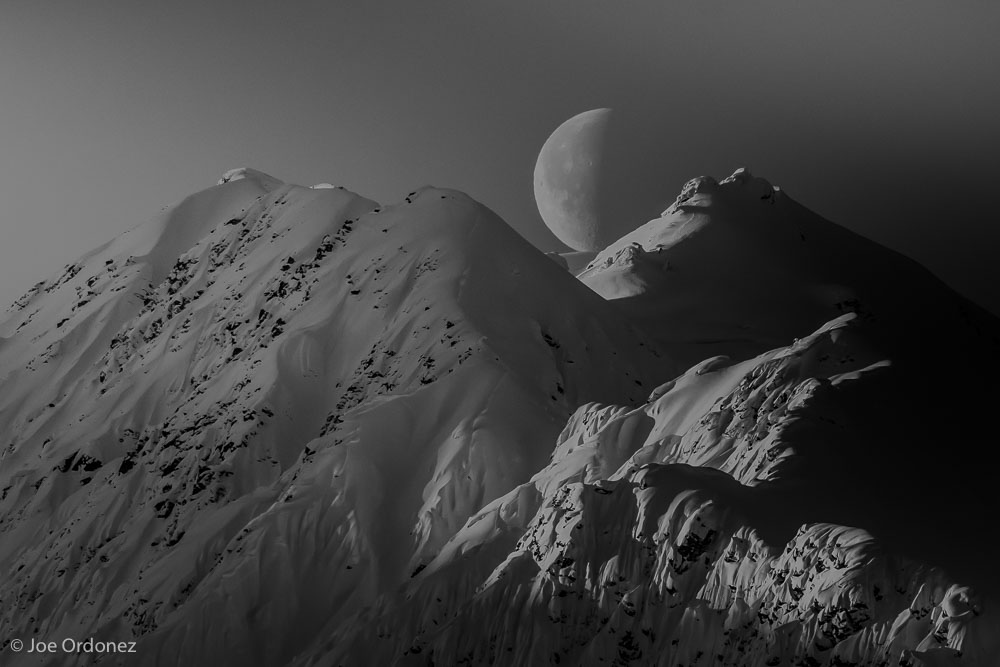 This shot of the moon is a tribute to Dr. Edgar Mitchell, the 6th man to walk on the moon. Mitchell died Feb 4th. I had the honor to spend the day with him when he came to Haines as the keynote speaker at the 2012 Alaska Bald Eagle Festival. My friend, Steve Kroschel, sometimes called the Dr. Doolittle of Alaska, asked me to drive Dr. Mitchell from town to Steve’s Wildlife Center for filming for a documentary film Steve was working on entitled “The Grounded.”

After the shoot was done, Dr. Mitchell and I drove back to town alone together in my vehicle. We went right through the heart of the Eagle Preserve and I thought he might want to get out and stretch his legs and enjoy the expanse of eagles lining the river. But he declined and seemed a bit tired. So we kept driving quietly into town. After a few minutes of silence, I asked him if he minded telling me what it was like to be in outer space.

My question woke him up and he turned to me, his eyes sparkling, “I don’t mind at all,” he said, “That Apollo 14 mission changed my life forever. I had been completely focused with all the details of the moonwalk, and of course all the stress and challenges that goes along with something of that nature. I returned to the spaceship and prepared to take off, everything was set, and for a brief moment I was temporarily finished with my duties. I took a deep breath, relaxed, and looked up into space. “

“I could not believe how bright the stars were. You see, there is no atmosphere on the moon and so the stars were incredibly bright and there were so many of them. At that moment, I felt a deep sense of connection and realized we are all united; we are all made of the same thing-stardust. “

He went on to explain that after the mission, he dedicated the rest of his life to the continued exploration of another type of space, the space inside each of us and our connection to the greater consciousness.

I accompanied him to the dinner at the Bald Eagle Festival where he was the featured speaker, and sat next to him at the table. It was interesting for me to sit next to a celebrity. Some folks were very respectful. Others walked right up to him and took his photo with no introductions. Many came up with something for him to sign- an old tablecloth commemorating a space mission, a copy of his book, a piece of paper napkin. He was very gracious and did not turn down anyone.

I took him back to his hotel and drove him to the airport the next day. I could have asked for a photograph with him or an autograph, and I thought about it, but I never did. I felt fortunate to have spent some time alone with him, and to get the reminder that life is precious and mysterious, and that we all have a lot to be thankful for. And that is more valuable than any souvenir he could have given me.

Hearing that Edgar Mitchell passed away February 4th made me pause and think a bit about my life and what I will leave behind. At the same time, I was preparing a talk for the Haines Photography group entitled “From Conception to Marketing, How I produced my book Where Eagles Gather.” I looked back and tried to figure out how I got to this point in life where I am today. What lessons have I learned? What lessons can I pass on? Who were the people who helped me along and what did they teach me?

In my next several installments I am going to go back and explore my life in Haines and share with you how I got to the point where I was able to produce Where Eagles Gather.

I first arrived in Haines in 1986 as a naturalist guide on a small cruise ship, the Great Rivers Explorer. We cruised Southeast Alaska and docked in Haines once a week. We would always go to Haines’ Sheldon Museum and watch Joel Bennet’s classic 1981 film, Last Stronghold of the Eagles. This was a movie about the Chilkat Bald Eagle Preserve with spectacular cinematography and a conservation message. It was produced when the area surrounding the Eagle Council Grounds was in jeopardy from large-scale logging. The movie excited me about the winter congregation, and also taught me about the controversy that led to the creation of the Preserve in 1982.

I went on a rafting trip in the Eagle Preserve and loved it. If the weather was good, I told the guests on the ship that there was nothing better they could do in Haines than go rafting. Not long after, I met Bart Henderson, owner of the rafting company Chilkat Guides and I told him that I wanted to move to Haines. Bart had taken a liking to me partly because I was able to fill his rafting tours to capacity. I took a liking to Bart because I saw in him something that I wanted to become; he was a wilderness guide.

I moved to Haines in 1987, began guiding and training guides and began to learn more about the Preserve and tell the story to the guides as I trained them. I gave many of those early talks on the bus as we headed to the river to go rafting. These “schpiels”, as they became known, became an important part of Chilkat Guides’ strong reputation. I made sure the guests heard the story of the Preserve and the story of controversy and compromise. And I made sure they learned about the unique ecology of the area and all about bald eagles.

The company grew, and I taught the new generation of “schpielers” the story and encouraged them to pass it on. Some guides did better than others. It became clear after a time that most of the guides were not passing on the complex story of the creation of the preserve and the conservation message entailed in the story. It was too complicated of a story to give to tourists on vacation. The schpiel became more about fun…..we called it “info-tainment.” Give some good information, keep it fun, have a good time. But in the back of my mind, I wondered….how could I get the story out to the public?

I began to organize my 35mm slides (remember them?) and realized I had some amazing images from all over the world and particularly from the Chilkat Valley. The idea sprouted in my mind to write a book about Haines and the Chilkat Bald Eagle Preserve in order to preserve the story of the Preserve.

One of the great things about working seasonally is that I could travel the world in the off-season. On a trip to Nepal, I had a Chilkat Guides business card with me with the company logo on it- a profile of a bald eagle’s head. In Kathmandu, there are dozens of little shops with one or two men hunched over their Singer sewing machines. These craftsmen can embroider T-shirts with any design one can think of. So I had them make me a shirt with the logo on it just for fun.

I came back from Nepal and was guiding a trip down the Chilkat River wearing my new T-shirt. On the bus ride back, someone said they wanted to buy a shirt like mine and asked where they could get one.

“Can I buy the shirt off your back?”

“Well, you should sell shirts on the bus. I bet you could make lots of money!”

I thought about it and went to Bart and told him I was interested in selling shirts on the bus.

Bart said, “Go for it, Joe. But I don’t want to take any risk. You buy the shirts, you keep track of the inventory and money, and you take the risk. You’ll learn about business, and you’ll make some extra cash. And the folks will have nice souvenir from their visit to Haines. Just give me a fair cut for each shirt.”

It seemed like a win/win for both of us, and it was. Shirts started selling and the company kept growing. I set up a system where each “schpieler” could sell shirts on the bus and make a commission. I didn’t know what to do with the cash….should I spend it, deposit it, how do I pay taxes for something like this? I didn’t have a clue.

Someone told me to go see Barbara Campbell, a local bookkeeper who had helped many a local entrepreneur get registered as a business. I went into her office and sat down. She had long grey hair, she chain-smoked and there were cats everywhere, even on her desk. But she knew her stuff and was easy to talk with. I looked at her through the cloud of smoke and told her why I was there.

She looked at me and said, “So, you’re making money at T-shirts. Well, with business, there’s income and expenses. If you make money, that’s called income. The more income, the more tax you have to pay. Now we need some expenses to offset the income. What do you like to do that doesn’t make you any money?”

“Well I’m a photographer and I love to take pictures,” I said a bit sheepishly. She hit me with questions in rapid-fire succession.

So even though my business income was coming in from T-shirt sales, we decided to form Rainbow Glacier Adventures as a photography business. In a roundabout way, I was on my way to becoming a professional photographer. That was 1992. (To be continued)