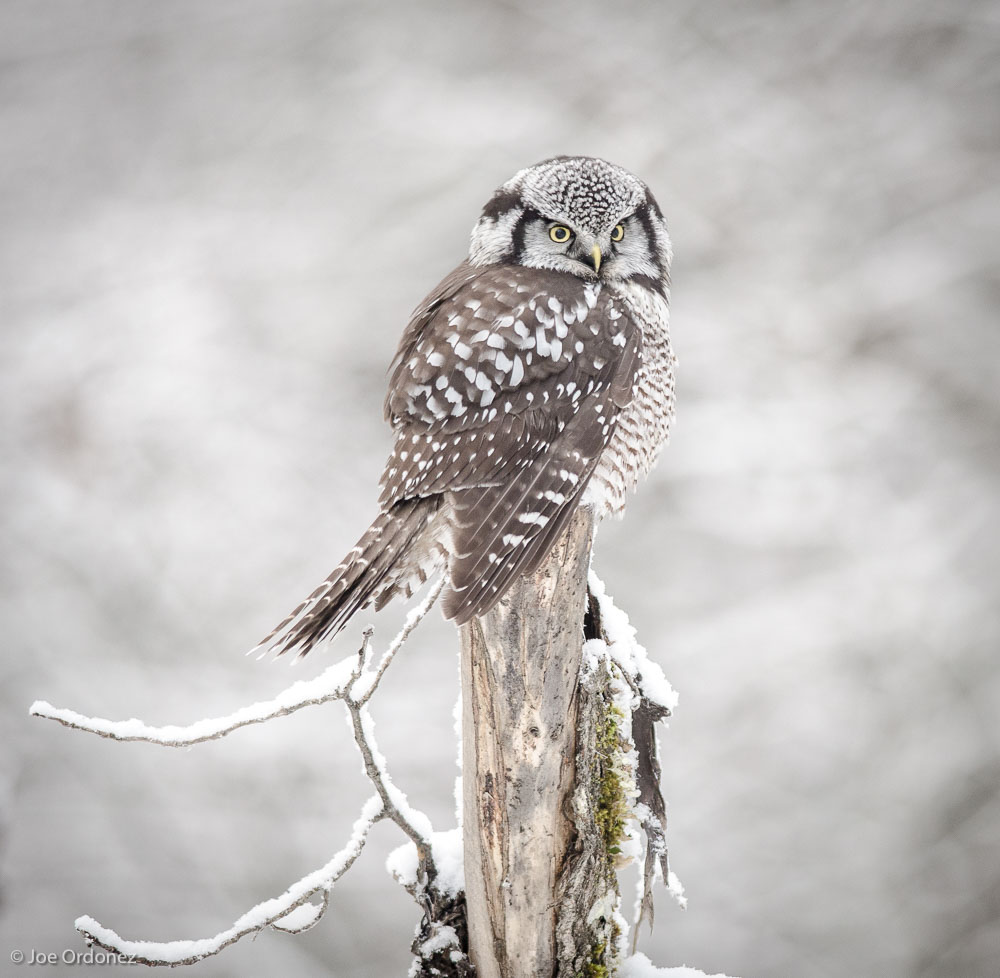 Encounters with owls are always special. For one thing, owls are more often heard than seen, at least here around Haines. The small owls make a sort of a peeping sound. The sound is fairly rhythmic and if you don’t know that it is an owl, then you might not guess what it is unless someone tells you. The other sound is the one most of us are familiar with, the “hoot.” This sound brings up feelings of fear in many people, perhaps because owls are mostly active at night. Some associate the call of the owl with death.

But there are some owls that are active during the day. The most common ones around Haines that I have had experience with are the short-eared owl and the northern hawk owl. This year, I have had two encounters with the northern hawk owl. One time I was up on the pass with my new friend, Matt Schetzer. Matt is an outstanding photographer who is spending more and more time in Haines. We went out together looking for wildlife and saw a hawk owl along the side of the road on a post. I knew right away it was a hawk owl by its medium size and its fairly long tail. We stopped further down the road and got out of the vehicle, prepared to hike back to the owl. To our surprise, the hawk owl flew towards us and landed on a post closer to us, providing for some great views. Of course, I wanted the owl to land on a tree or some type of natural object to give the photo a more “owl in the wilderness” feel. Well, he did fly to another tree, but it was further away, the light was in the wrong direction, so I couldn’t get a very good photo. But it didn’t really matter. As I said, encounters with owls are always special, and I went home happy that day.

Later on, I went out with my friend Oliver Klink. Oliver is my “photo guru”…his knowledge of photograph is amazing, he leads workshops all over the world and he has taught me tons about photography. We went to a place rarely visited by photographers in Haines, where there is a small bridge that crosses a stream, and a few houses and cabins nearby. Oliver looked the scene over, turned his camera towards the river and the mountains, and set up his tripod. I put my tripod next to him and took the same shot. Oliver had told me that it slightly irritates him on photo workshops when students wait until he sets up his tripod, and then set their tripod right next to him in the exact same location. I took the shot and then looked around a bit more. I saw a canoe, the bridge and the houses. The canoe was a sort of a bright green, the color of the houses was muted yellows and greys, and the rest of the scene was white with snow and some dark reflections in the calm river. I realized that the way to photograph the scene would be as a black and white. This would join all the colors, and give more emphasis on the tones and the composition, including the reflection of the trees in the water. I set my tripod up, and Oliver asked me what I was doing. I explained what I saw and what I thought the final image would look like.

He said, “ That is a great idea. That will make a very nice image.” Oliver set his tripod up next to mine, looked over at me with a slight smile and said “You have snatched the pebble from my hand!”

I’m not sure if all my readers know what he was referring to so I will explain here. In the 1970’s, there was a TV show called Kung Fu. The star, Kwai-Chang Caine, was a half-Chinese and half-Caucasian orphan. His master raised him in the Shaolin monastery. Every week at the start of the show, the master would test

In the 1970’s, I was a young karate student in Staunton, Va and I watched Kung-Fu religiously. Between Kung Fu TV, Bruce Lee movies and daily karate practice, I was immersed in the world of karate. For a birthday present a few years ago, my wife and daughters bought me the entire Kung-Fu TV series on DVD, and I watched it night after night during the long winter nights here in Alaska. So when Oliver said that I had “snatched the pebble from his hand,” it had special meaning to me. It was like graduation day!

Oliver and I left the bridge and went to the Eagle Council Grounds stopping at 21 mile Haines Highway. A light rain was falling, all the other photo groups had left and we had the place to ourselves. There were a few eagles flying nearby, but for some reason we were uninspired. I really believe in inspiration when it comes to photography. When I am inspired, I pull out my camera and begin to shoot. I know it sounds like a cliché, but time stands still. I feel myself disappear into the subject, and in a way, I become one with what I am photographing. Maybe this is some of the Zen training from my youth as a karate student. Some call it getting “lost in the zone.”

A group of small birds called crossbills flew into the tree next to us. Crossbills are amazing with a specialized bill that they use to pry open pinecones to get to the seeds inside. We watched them and I felt a sense of peace and happiness. They were so close to us, almost tame, as they were intent on eating the alder buds and didn’t seem to notice us. I enjoyed the moment, and instead of getting out my camera to capture it, I just felt the good feeling that one gets from being close to a wild being.

Lacking inspiration, we decided to drive towards town to another spot where the light was better and maybe we could get some good shots of the mountains. I am not strictly a wildlife photographer; if you’ve looked at my book you know that I have many landscape shots. As a matter of fact, I think the landscapes around Haines are world-class and relatively unexplored photographically. While Haines is known as a place to come to photograph eagles, the word is not yet out that Haines is one of the great places in the world for landscape photography. With my career as an international guide, I’ve seen many of the most dramatic locations on the planet and Haines ranks up there on the top. I talk a bit about this in my radio interview with local radio station KHNS. http://khns.org/decades-in-the-making-where-eagles-gather-released-to-much-fanfare

As we drove towards town, Oliver looked out the window and said…..”stop, there’s an owl.” It was tough to find a place to park safely, with all the snow, but we finally found a spot and walked back towards where the owl was sitting on a post. It was a northern hawk-owl and it was great to see the same species of owl I had seen up on the Chilkat Pass a few weeks before with Matt.

Was it the same owl? I couldn’t tell, but, like the other one, it was sitting on a post. It was déjà vu all over again. Would the owl move to a more natural-looking location, or stay on the post? I took a few shots to make sure that all my settings were correct, so if the owl flew to a nearby bush I would be ready. The owl flew back onto some private property and landed up in a tree. Well, I knew the owner so I felt OK with following the owl a bit to see where it went next.

The owner drove up, and it turns out that the person I had thought was the owner was only renting the place. I explained what we were doing, who I was, and he welcomed us with a big smile. “Oh, you’re Joe Ordonez. I‘ve heard of you and your company, Rainbow Glacier Adventures. I thought maybe you or some other tour company might want to use this property for tours. We have a big house and we’re remodeling it for guests. Do you want to come check it out?”

Actually, I wanted to stay and wait for the owl to fly to a better location and take some shots. I was inspired. But what could I do? I said, “Of course, I’d love to see your place.”

Oliver and I went in and he gave us a full tour. He said that brown bear feed on salmon on the nearby stream, and maybe we could host photo groups in his lodge in August and September. Maybe in November we could host groups there during the bald eagle congregation. It all sounded good, but I kept thinking about that owl……

After a full half hour in the house, he said he was getting back to work and we were ready to head down the road. We stepped out into the fresh air, looked at the tree and the owl was gone.

As we walked back to the car, I said, “Boy, that guy sure was nice. But I wish that owl hadn’t flown away.” We looked across the road and there was the owl, sitting on a small tree broken tree trunk. It let us approach closely, and sat quietly while we set up our tripods. I got lost in the zone………